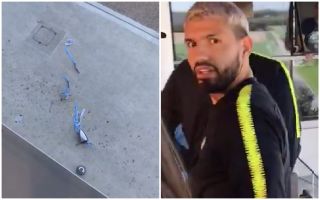 Man City caused quite a stir on Monday as a clip went viral seemingly showing the Premier League trophy left destroyed after being dropped from a balcony.

Pep Guardiola’s men secured an historic domestic treble this season, which was completed after their win over Watford in the FA Cup final at Wembley at the weekend.

With so many trophies to juggle, it would have been difficult for the players to keep them all safe, and it appeared as though they had been left red-faced as the clip below shows the Premier League trophy in bits after seemingly being dropped from a balcony.

Given a sheepish looking Sergio Aguero walks away from the scene too, it all looks rather worrying and it did indeed spark an angry response from some rival fans, until someone is heard laughing in the background, which would suggest that not all is as it seems.

As noted by the Manchester Evening News, fortunately the trophy is fine as it’s reported that it was part of a prank by City TV, with the trophy spotted later on during the celebrations.

It’s added that it was perhaps a dig at Oleksandr Zinchenko after he knocked the trophy over last year, with Man City clearly finding new ways to enjoy their success as they’ll have a well deserved summer off after what has been an incredible campaign for them.