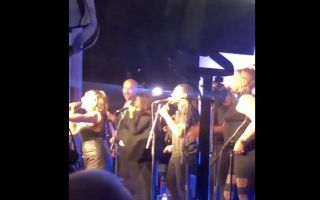 Manchester City boss Pep Guardiola couldn’t resist jumping on stage and joining a live band as he revelled in the club’s treble celebrations on Monday.

The Spanish boss guided his side to Premier League, FA Cup and Carabao Cup glory this season, becoming the first team in English football history to complete the clean sweep of domestic honours.

A stunning 6-0 win over Watford in Sunday’s FA Cup final saw City pick up their final piece of silverware and the blue half of Manchester have been enjoying celebrations since, with a parade and staged event held yesterday.

Guardiola was pictured singing along with club chants during the open-top bus parade and later in the day he was at the centre of the celebrations at Manchester cathedral, singing and dancing with backing singers on stage as they produced their own rendition of ‘Just Like A Prayer’ by Madonna.

Pep Guardiola hitting all the right notes on AND off the pitch! ??

When you have just won the first ever domestic treble ????????? #FOURMIDABLES pic.twitter.com/ypsjWfOd9Y