Barcelona have identified Liverpool striker Divock Origi as a possible summer signing, after his match-winning display against them in Europe.

The two clubs met in the semi-finals of this year’s Champions League, with the Spanish champions coming out on top in the first leg at Camp Nou with a 3-0 victory.

Liverpool produced a dramatic turnaround in the second leg though, winning 4-0 at Anfield thanks to braces from Origi and Georginio Wijnaldum.

Origi was asked to lead the line for Jurgen Klopp’s men in the absence of both Roberto Firmino and Mohamed Salah, acquitting himself to the task admirably in front of an expectant home crowd.

The 24-year-old’s second goal, in particular, was a thing of beauty, as he finished off a cleverly conceived corner routine inspired by the quick thinking of Trent Alexander-Arnold.

According to Mundo Deportivo via The Sun, Barcelona are now weighing up an approach for Origi, having been impressed with his overall performance on May 7. 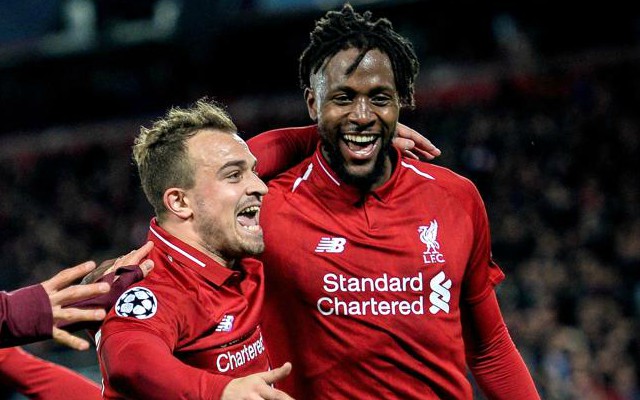 The Blaugrana are in the market for a new number 9 to compete with Luis Suarez for a regular spot in Ernesto Valverde’s starting line-up and the Liverpool ace is reportedly near the top of their list.

Origi has had to be content with a bit-part role at Anfield this season, featuring in just 22 matches across all competitions, but the five goals he has contributed to the team’s cause have all been of major importance.

The Belgian forward has one year remaining on his existing contract at Liverpool and the club are hoping he will sign a new deal, but he has not yet made a final decision on his future.

Klopp has so many attacking options at his disposal that the Reds would not necessarily miss Origi all that much, but he has become something of a fan favourite in recent times.

Though he might not be certain of more opportunities at Barca given their own impressive resources, the Belgium international would surely find a lucrative switch to Spain difficult to turn down, which makes this story one to keep an eye on as it develops.