Manchester United are expected to name Ashley Young as club captain next season, which has been met with an angry response from supporters.

Antonio Valencia was given the armband for the 2018-19 campaign, but he only managed to make five Premier League appearances in total after falling behind Young and Diogo Dalot in the squad pecking order.

The Ecuadorian will leave Old Trafford this summer upon the expiration of his current contract, with the club now ready to name a new captain ahead of next season.

According to The Times, Young will be given the armband permanently after leading the team on several occasions, with Paul Pogba set to earn vice-captaincy duties.

This latest news has not gone down well with United fans, who have reacted furiously to the imminent announcement of a much-maligned star being handed such an important responsibility. 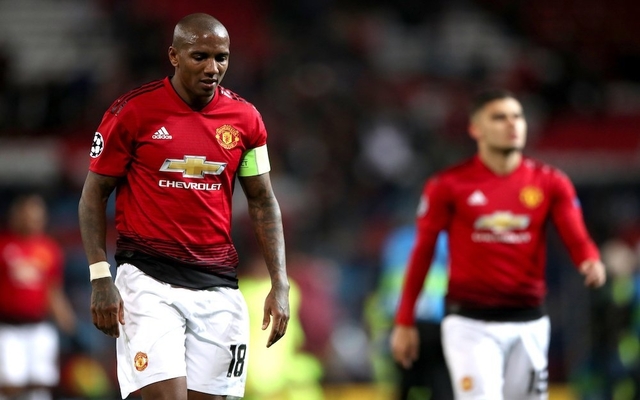 Twitter account ‘Red Devil bible’ described the decision to promote Young as captain a  ‘Complete joke’ and there has been plenty of similar comments across social media.

If reports are true about Ashley Young then Ole Solskjaer’s comments about ‘ruthlessness’ and taking the club back to where it belongs is completely bullshit. The first thing we should do this summer is at minimum get rid of Ashley Young and the deadwood. Complete joke.

The 33-year-old full-back has faced a great deal of criticism for his performances in defence over the last year, with United shipping 54 Premier League goals in total as they slumped to a sixth-place finish.

Young’s displays against Barcelona in the Champions League quarterfinals drew the most negativity and his costly mistake in the second leg at Camp Nou ultimately set United up for a 3-0 loss.

The Red Devils will not be playing in Europe’s elite competition next season and many fans and experts feel major changes are needed at the club in order to return to the top of English football.

The Times does state United are planning to rotate Young regularly, but the general consensus among the club’s faithful followers is that he is not the right man to lead the team into a new era.

Check out some more reaction from supporters below, via Twitter.

Ashley Young expected to be named club captain (The Times)

I’m just gonna assume someone’s leaked this Ashley Young Captain news to cause a meltdown ? I REFUSE to entertain this! ????? #mufc

Ashley young walking out as captain next season with a possible vice captain of Chris smalling ??good luck in your future ventures oke lad coz your #MUFC career as a manager wont last long if that’s your thinking. I clinging on to the fact this is not a cert yet but!! ????

According to reports, Ashley Young is expected to become Manchester United club captain next season.

If Ashley Young is still captain or even starting for United next season, I hope we get 10th or lower, because it has no ambitions. Ashley Young needs out.

@ManUtd after the season we just had, the lowest you can do to us fans is giving the captaincy to our worst player in the name of @youngy18 Give us some pride and choose somebody who is worth the honour