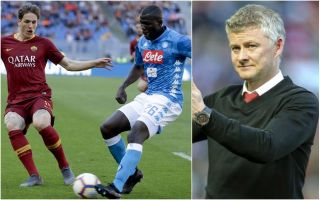 Manchester United are reportedly ready to go all out for the transfer of Napoli centre-back Kalidou Koulibaly this summer in what could be one of the biggest signings ahead of the new season.

The Senegal international is undoubtedly one of the best defenders in the world at the moment, and looks a much-needed addition to the squad at Old Trafford after a disappointing season that saw the team concede their highest ever tally of 54 goals in the Premier League.

According to Don Balon, United manager Ole Gunnar Solskjaer has made it clear to the Red Devils board that Koulibaly should be signed at any cost, and they are now ready to deliver on that.

The report explains that MUFC have had an opening offer of €110million rejected by Napoli, but it seems they’d be ready to go as high as the 27-year-old’s €125m asking price.

Don Balon make it clear United feel that fixing their defensive problems is ‘priceless’, so will not be put off that kind of fee.

Could Kalidou Koulibaly leave for a big-money transfer to Manchester United?

If they can persuade the Italian giants to sell, this would no doubt be one of the stories of the summer as Koulibaly looks a player who could have the same kind of impact on Man Utd that Virgil van Dijk has had at Liverpool.

Jurgen Klopp’s side were seen as very shaky at the back before they splashed out on the Dutchman, and are now the real deal in terms of challenging for major honours, finishing just a point behind Manchester City and reaching the Champions League final.

United fans will hope progress can be made on the Koulibaly deal soon.