Liverpool have reportedly identified Leeds full-back Leif Davis as a possible summer transfer target, after sending scouts to watch him in action.

The 19-year-old moved to Elland Road from Morecambe in 2018 and earned four appearances in the Championship this season, helping the team secure 12 points out of 12.

The English left-back has been tipped for a bright future at the highest level and also has the versatility to operate as a centre-back, which makes him a potentially valuable asset.

According to The Sun, Liverpool are eyeing Davis to bolster Jurgen Klopp’s squad in one key area, with Andrew Robertson currently the only natural left-sided defender on the club’s books.

Leeds boss Marco Bielsa is hoping to keep hold of the teenager if he remains in charge for another year, but the Reds are poised to swoop for the £4 million-rated starlet after monitoring his progress in recent months – as per The Sun.

With Alberto Moreno set to leave Anfield in the coming weeks, Liverpool could end up short on defensive cover and may make a move for Davis to increase overall squad depth. 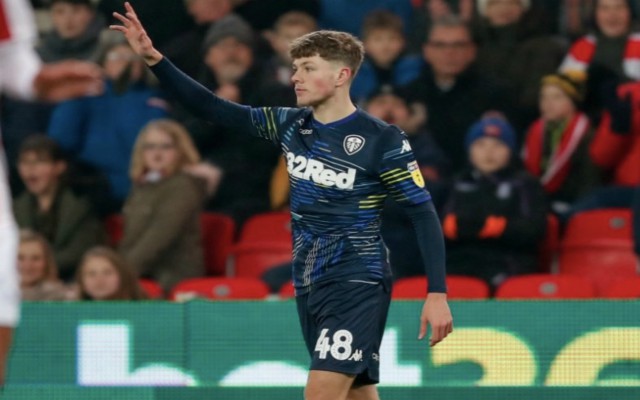 Leif Davis in action for Leeds

The Championship star is contracted to remain at Leeds until 2021, but the allure of a move to Anfield could prove too tempting to ignore if the Reds launch an official bid.

Davis would likely have to remain content with a role on the sidelines while he develops his all-around game, but Liverpool have a strong track record when it comes to blooding younger talent.

Klopp will be hoping to strengthen significantly this summer in order to keep pace with Manchester City, who managed to win a domestic treble this season.

Liverpool ran them close in the Premier League title race, finishing just one point behind in the final standings and they could yet win the Champions League for a sixth time, with a clash against Tottenham in the showpiece event scheduled on June 1.

City will surely add to their fearsome squad while the market is open and it is important the Reds do the same, even if they only target promising young players such as Davis to help increase their options ahead of another important year.