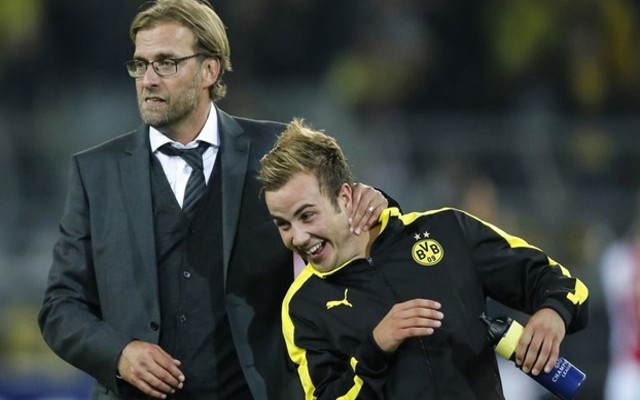 Mario Gotze has paid tribute to his former Borussia Dortmund boss Jurgen Klopp and provided an insight into his brilliant personality.

The current Liverpool manager gets that personality across when talking with the media and interacting with the fans, but it sounds as though he maintains that jovial side of him even with his own players.

As noted in his column on the Players Tribune, Gotze recalled one particular story back when Klopp was his manager at Dortmund and it related to his hair transplant.

“He was an outstanding coach, but his personality was the most important thing for me as a young player,” Gotze wrote in the Players’ Tribune.

“I have never met a manager in football who was so naturally funny. I will never forget the time I ran into him in Dusseldorf during the summer. He was going to see the specialist there to have his hair transplant done.

“This became big news in Germany, but he was so funny about it. He was smiling, telling me all about it — how cool it was going to look and everything.

“And then as he was leaving, he just gave me a wink and he said, ‘Mario, don’t worry, I will save the phone number.

The current Liverpool squad will likely have plenty of stories of their own, but the key thing for them will be to add trophies to their hard work moving forward, starting with the Champions League on June 1 in Madrid.

Having lost in the final last year coupled with the thrilling, yet disappointing, Premier League title race this past season, Liverpool and Klopp will undoubtedly be itching to get their hands on silverware and we can already predict the priceless scenes involving the German tactician if they get the chance to celebrate.