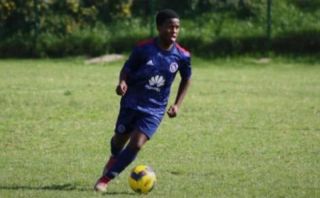 Ajax Cape Town have revealed that youth player Samora Gwagwa was the victim of an horrendous assault as he was left for dead.

As seen in their tweet below, the club have confirmed that the 16-year-old was not only beaten up in Gugulethu, but that he was also dumped there without a means to get help.

Fortunately, he was spotted and they have now confirmed that he is recovering well after the ordeal with the hope that those who carried out the assault are identified and face action.

Nevertheless, it’s unclear as to why Gwagwa was assaulted in the first place as there is still a lack of details surrounding the incident, but undoubtedly the most positive thing is that the youngster himself is doing well now and is on the road to recovery.

Ajax CT received news this morning that u16 youth player Samora Gwagwa was severely beaten on the weekend.

He was dumped in Gugulethu, luckly he was discovered in the dumping spot by good samaritans.

The good news is that Samora is recovering well?? pic.twitter.com/lb5DliXivU