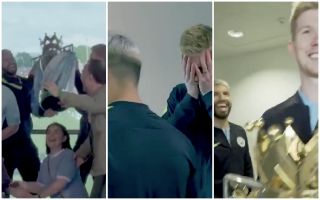 Man City caused quite the stir earlier this week after footage emerged of them seemingly dropping, and destroying, the Premier League trophy.

Fortunately, it was all part of a prank planned by Kevin de Bruyne and Sergio Aguero along with City staff, as they invited a group of fans to take pictures with the trophy after their title success earlier this month.

As seen in the video below, the pair were briefed with what to do prior to the event taking place and sold it brilliantly as the fans in attendance looked on in horror at what happened.

Luckily, they didn’t leave them hanging on too long and filled them in on the prank to ease their fears, but De Bruyne was clearly delighted with it and in fairness, he played it very well to make it convincing.

Rest assured, it was a replica of the trophy and not the real thing, which appeared later on for the parade through the city as the Premier League champions celebrated a domestic treble this season with Pep Guardiola undoubtedly hoping to come back next season and do it all over again.

Clearly though, they wanted to have a little fun this time round although it’s fair to say that the Man City fans in the video below won’t have appreciated the scare that they got as the ‘trophy’ fell to its doom…

After SHOCKING FOOTAGE emerged of a broken @premierleague trophy yesterday, we thought it time we put the record straight…