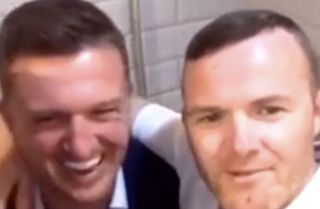 The far-right activist is certainly not someone Rooney would want himself or his family in any way associated with, and the Sun report the 33-year-old is not at all happy about the video clip below:

Is that honestly Wayne Rooney doing a line of beak with Tommy Robinson? Must be his brother, surely?

Either way, nice one for ending #tommyrobinson’s political career before it’s started pic.twitter.com/pLxasdfNVG

The video shows Graham Rooney looking very friendly with Robinson and another unnamed man in some pub toilets in Liverpool.

Former Man Utd captain Rooney has never been open about his political views, but it seems he is not keen on his brother possibly approving Robinson’s rather extreme agenda.