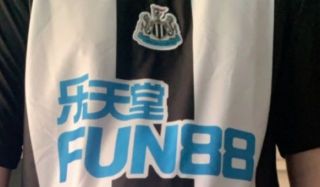 Leaked images have appeared online appearing to show what Newcastle Utd’s new home kit will look like for the 2019/20 campaign.

The Magpies ended this past season in 13th place in the Premier League table, and they’ll be hoping to build on that and start climbing the standings next year.

They’ll do so with a continuation of their commercial partnerships with Puma and Fun88 it seems, as one fan has claimed that they’ve managed to get their hands on the new kit, as seen in the images below.

It’s fair to say that it hasn’t gone down well for the most part, with many supporters left annoyed and frustrated with the design, and so it remains to be seen if this is officially released by Newcastle in the coming weeks.

They may well have more important matters on the agenda though, namely sorting out a new contract for Rafa Benitez given his current deal is set to expire this summer.

However, the club could be set for a backlash if this goes out on sale, with many not shy in expressing their displeasure with Puma’s latest effort.

I think this might be the worst #nufc home shirt of the last 20 years. Awful. https://t.co/Jy6SSp8M2U

The new Newcastle shirts look awful. All three. I can’t pretend something is good looking because it has a Newcastle badge on it. Take Clarence Acuna for example. #NUFC

It looks like a toddler version of a proper shirt. It is made of toweling?

Puma are so shit. I really miss Adidas…

It’s shocking-everyone having a laugh at the Mackems for theirs but we’ve been given a black shirt with two white stripes on it. Really, really bad.

Incredibly, they’ve managed to create a kit that my eight year old DOESN’T want! Quite an achievement ?

That is fucking awful. It’s just a black shirt with two white stripes on it. Looks like a highways agency design. pic.twitter.com/xktkBudFWe

The new apparent Newcastle kit for next season looks awful. The sooner we get rid of puma the better.