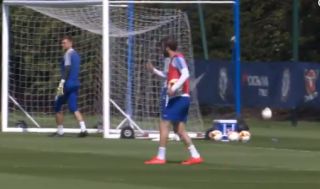 Chelsea striker Gonzalo Higuain has been spotted losing it at coaches and team-mates in an angry rant during Blues training.

It’s not clear what caused this row to break out, but Higuain is very clearly wound up and venting his anger for a long time in this video clip below.

What annoyed the Chelsea striker in training yesterday? ? pic.twitter.com/5iXNVXFDWm

The Argentine may well be feeling frustrated with life at the moment after a poor season for him personally, having been offloaded by Juventus and struggling at loan spells with both AC Milan and Chelsea.

Still, this is far from ideal from a CFC point of view as they’ll want the squad mood to be good ahead of next week’s Europa League final with Arsenal.