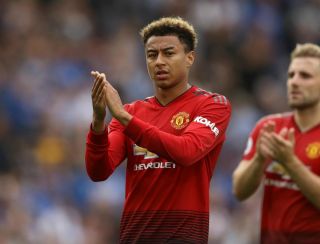 Man Utd ace Jesse Lingard has had his team delete a social media post after paying tribute to the victims of the Manchester bombing in 2017.

While the thought behind the post was commendable as given he’s a Manchester native, the tragic incident would have hit home harder for the likes of Lingard and Marcus Rashford.

However, as seen in the image below, he or a member of his team opted to include the ‘J Lingz’ brand logo at the bottom of the tribute on the clothing brand’s pages, which in turn earned him a backlash from fans as seen in the tweets below.

It really wasn’t the most sensible of ideas, as ultimately the brand logo had no place on the tribute and should have been left out altogether.

Unfortunately for Lingard, those making the decisions on his social media pages have made a distasteful call on this one, and have rightly removed it, albeit perhaps after seeing the response that it got.

As noted by BBC News, there was a memorial service in Manchester on Wednesday to mark the second year anniversary of the tragic incident which left 22 people dead and many more injured after a suicide bombing at the Manchester Arena following a concert.

A logo on a message of rememberance is always a nice touch pic.twitter.com/W2lkr3WFaa

Lingard putting his brand name in a remembrance post. Twice. Where do you even begin…

Unbelievable!!! This is DISGUSTING !!!!

What an absolute state @ManUtd bin him.

Is Jessie Lingard for fucking real??
Not the time to pushing your brand son pic.twitter.com/DBShw8kZcT

Lingard actually just slapped his logo right across this

No words for it pic.twitter.com/ZAnOeOHAM2

Every club employs someone to come in & talk to players regarding the use of social media & the consequences of posting stuff .. Man Utd players have made some massive fuck ups with their postings, Jones, Pogba & now Lingard all bringing embarrassment on the club & themselves ?????

Can’t Lingard just put that down to his marketing team like the other dickheads in the squad? The usual apologists will no doubt be trotting that line out soon.

Just Jesse Lingard promoting his clothing brand while remembering a terror attack where 20 people were killed, days after proclaiming himself the next generation’s inspiration. https://t.co/bM2lmWhaSi