It’s an all-Premier League final in Madrid on June 1st, with both sides producing some stunning performances in Europe this season, particularly with their thrilling comebacks in the semi-finals.

Liverpool lost 3-0 in their first leg away to Barcelona before blitzing the Catalan giants 4-0 at Anfield to go through to the final. 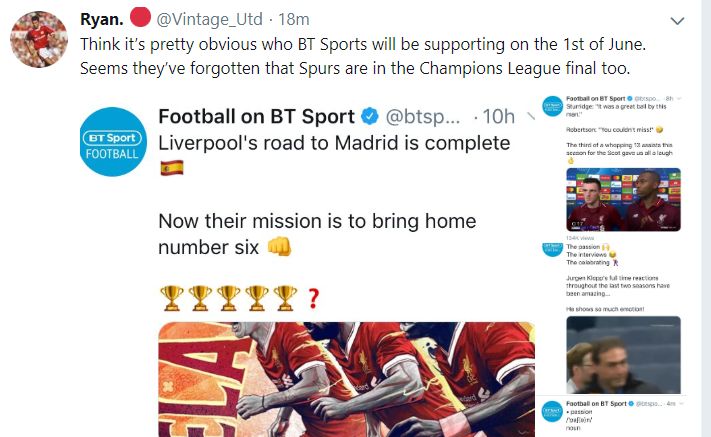 Spurs, meanwhile, were 3-0 down on aggregate with just 45 minutes left to play of their tie against Ajax before an incredible second-half hat-trick from Lucas Moura sent them through as well.

Liverpool may be the slight favourites for this big game, but that of course is no excuse to give them considerably more coverage.

Is there a hint of bias from BT Sport’s Twitter feed below? We took a little look at the stuff they’ve posted this week…

Above are examples of what we’d count as positive posts focusing on one of the two teams contesting the final.

Using that admittedly unscientific definition, we count 14 of those for Liverpool and just 8 of those for Spurs this week.

That could still change and is not necessarily a sign of bias, but perhaps Ryan has a point about BT Sport needing to even it out a bit.