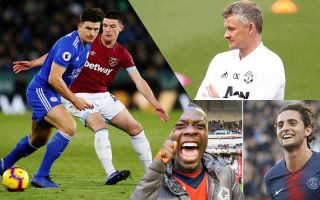 Manchester United manager Ole Gunnar Solskjaer reportedly has around eight top transfer targets as he hopes to get the bulk of his business done by July 1st.

According to the Daily Mirror, the Red Devils boss has some big names on his radar in what looks a necessarily major rebuilding job at Old Trafford this summer.

With United finishing 6th in the Premier League and with no silverware in 2018/19, it’s clear it will take a lot of new faces to help bridge the gap between themselves and champions Manchester City, who finished 32 points ahead of them in the end.

For context, that means Solskjaer’s side were closer in points to relegated Cardiff City than they were to the champions, while they also conceded 54 goals in a single Premier League season for the first time.

There are plenty of areas in this United squad that could do with strengthening, and these are the eight names reportedly on the club’s agenda this summer:

The Mirror the £100m-rated Borussia Dortmund winger as one player United are keen on, though their failure to qualify for the Champions League could prove a major stumbling block in getting this deal done.

This is a big shame as Sancho seems an ideal fit for MUFC and like a player who could light up the Premier League for many years to come.

Another option for United in attack could be Lille star Nicolas Pepe, who has been one of this season’s breakthrough stars.

The Ivory Coast international has 23 goals and 11 assists this season and would clearly be a major upgrade on the likes of Alexis Sanchez and Anthony Martial.

One of the finest defenders in the world, the Mirror also list Napoli centre-back Kalidou Koulibaly as a name on the club’s agenda.

The Senegal international seems a necessary purchase to help Man Utd improve that goals-against column next season, but is also a highly ambitious target for the club.

More realistic for the Red Devils may be Leicester City star Harry Maguire, another top CB who would instantly improve the defence at Old Trafford.

Maguire has been consistently solid for club and country over the last couple of years and is now surely ready for the step up to a bigger club.