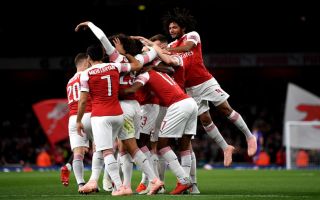 Arsenal forward Danny Welbeck is attracting a lot of interest from Premier League sides, the ace will leave the Gunners on a free transfer once his contract expires.

According to The Evening Standard, a whole host of Premier League clubs are in interested in signing Danny Welbeck on a free transfer, once his contract at Arsenal expires this summer.

The England international is back in full training after recovering from a serious injury and The Standard even reported that the 28-year-old bagged a hat-trick in a behind-closed-doors match for the Gunners last week.

It’s understood that Marco Silva’s Everton are in pole position to sign the versatile attacker, however the likes of West Ham, Newcastle, Crystal Palace and Wolves are all keen on signing the former Manchester United ace.

Goodison Park seems the favoured destination for Welbeck right now, The Standard’s report highlights that the Merseysiders are prepared to offer the energetic ace an increase on his current £100,000-a-week salary with Arsenal.

A move to Everton could be amazing for Welbeck, the star can link up with former Gunners teammate Theo Walcott .

In addition to this, with Dominic Calvert-Lewin and Cenk Tosun yet to prove themselves as Everton’s main frontman, Welbeck has the perfect chance to come in and take the mantle as the side’s talisman. This would do wonders for Welbeck’s hopes of getting himself back into the England setup ahead of Euro 2020.

Welbeck managed to score five goals across all competitions in 14 appearances for the Gunners prior to his serious ankle injury.

Considering that just one of those strikes came in the Premier League, as well as Welbeck’s troubles with injuries – a potential move for the forward from any of these top-tier clubs could be very risky.

Welbeck could feature for the Gunners in their Europa League Final against Chelsea on Wednesday night, this is a long shot, but given the massive steps the star has made after returning from injury – Welbeck could be a handy option for Unai Emery on the bench.

Trouble ahead for Man United as Solskjaer loses it in the dressing room with major star Apr 5 2021, 7:31
Manchester United FC

‘It is much easier to accept’ – Liverpool’s Andy Robertson has the perfect solution for VAR Dec 1 2020, 13:50
Liverpool FC