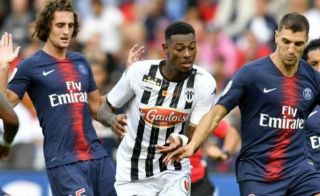 Arsenal and Man Utd will reportedly compete for the signing of Adrien Rabiot this summer as he prepares to leave Paris Saint-Germain on a free.

The 24-year-old was limited to just 20 appearances this past season, as he was cut from the squad by coach Thomas Tuchel in December after it became apparent that he wouldn’t be signing a new deal with the Ligue 1 champions.

In turn, an exit is inevitable this summer, and given the quality that the Frenchman possesses, it’s no surprise that reports suggest that there is plenty of interest in acquiring his services.

As noted by The Sun, both Arsenal and Man Utd are said to be keen on signing him, and it would certainly make sense for either club as they look to fill the voids left behind by Aaron Ramsey and Ander Herrera respectively with both men moving on this summer on a free transfer too.

Further, given the technical quality and creativity that Rabiot has which would offer a different dynamic in that department coupled with an attacking threat, he could be a very useful addition for either Premier League giant to offer balance in midfield.

Time will tell who manages to reach an agreement with him, but with Arsenal facing Chelsea in the Europa League final next week, their focus surely lies elsewhere for the time being.

As for Man Utd, Ole Gunnar Solskjaer needs reinforcements this summer after a bitterly disappointing campaign, as they failed to qualify for the Champions League and ended the year empty-handed.

Arsenal could yet be in the same boat in terms of not being able to offer Champions League football if they don’t win in Baku on Wednesday night, and so it seemingly sets up an intriguing scenario to see where Rabiot will end up next if a move to England is on the cards.

No exit: Juventus star not leaving this summer as he looks ahead to Pirlo link-up