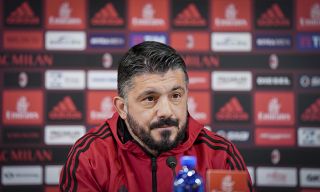 Gennaro Gattuso spoke to the media ahead of AC Milan’s crucial clash with SPAL on Sunday, as they hope to secure Champions League qualification.

The Rossoneri know they must secure victory to have any chance of breaking into the top four in Serie A on the final day of the season, while hoping that either Atalanta or Inter slip up so that they can leapfrog them into the qualification spots.

Having won three consecutive games, they will be in a more confident mood and buoyed by the momentum that they’ve built in recent weeks, but Gattuso conceded that he expects a tough game against SPAL while paying tribute to his squad for their professionalism this week.

“I saw everything in its place and great professionalism from every single player,” he is quoted as saying by MilanNews.it. “No-one has been thinking about anything past this game; everyone, from the players to the management, have been focused on the match against SPAL and I have been very impressed by the mentality.

“This is a fantastic group of players, I am very grateful to them for all their hard work this season. Whatever happens tomorrow, it will not change my opinion of this squad.”

Meanwhile, the Italian tactician also spoke about his own future, as failure to qualify for the Champions League could perhaps raise question marks over whether or not he continues beyond this season.

However, Gattuso was calm and insisted that the objective before the season was to compete for a top-four finish, something that they’ve done right to the end of the campaign, while reassuring fans over the speculation surrounding the hierarchy with suggestions that Leonardo could leave, as per Goal.com.

“Coaching Milan is a dream, it was difficult and I hope it can continue,” he added. “It’s an honour and I hope I can do it for as long as possible.

“The club never said the Champions League was compulsory, but only to try to qualify, and we are there, we are in contention on the last day and we’ll play for it.

“Until 10.30pm tomorrow we only need to talk about the pitch, only about SPAL. From next week there will be time and a way to talk about all this [his future].

“The fans must know that there is very strong club behind the scenes, made up of smart people, and they must expect the best because I have known all those who run the club and know which way they want to go. We must have confidence and be calm”.

Gattuso also suggested that he would potentially don a new look if Milan manage to qualify for the Champions League, claiming that he would consider shaving his beard off, while leaving with a message for the reporters in attendance who have followed him and Milan this season.

“I haven’t cut my beard for ten years, if we qualify maybe tomorrow night I’ll show up without a beard. But then again, I don’t know, we’ll see.

“I thank you all and excuse me if I lost my head occasionally, I have to improve on this and I thank everyone for their professionalism even if sometimes you have written bulls***.  We’ll see at the end of tomorrow’s game who is there and who climbs on to the Milan train. Trust me, if I see some of you on our train, I will kick you off it.

“When you train a team like Milan, it’s a dream and I was given this great opportunity. I will do everything to stay here as long as possible and bring important results to this glorious club.”