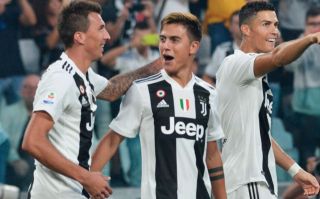 Paulo Dybala has stated that he wants to stay with Juventus this summer amid reports linking him with a move to Man United.

Dybala has had a difficult season for Juve this year, with the forward only managing to bag a total of 10 goals in 41 appearances for the Old Lady.

And following this difficult season, rumours of the 25-year-old moving away from Juve have been rife, with the Mirror stating that the forward has been linked with an £85M move to Old Trafford.

However, it doesn’t seem like Dybala will be going anywhere anytime soon if his words are anything to go by.

According to Calcio Mercato, Dybala has commented on his future, stating that “I talked to the club and Fabio Paratici and they know what I think. I want to stay at Juventus again next year, I want to continue playing here”.

United could definitely have done with a player of Dybala’s quality, especially considering the season they’ve just had.

The Red Devils have had a season to forget this year, as they finished sixth in the Premier League, something that means they won’t be playing in the Champions League next season.

It would’ve been hard enough trying to sign Dybala without the offer of Champions League football, and now following these words, it doesn’t seem as if the Argentine international will be sealing a move to United any time soon.