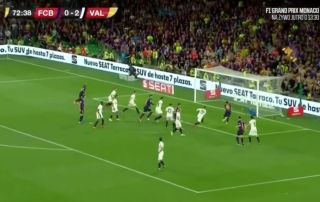 Lionel Messi clawed a goal back for Barcelona this evening, as the Argentine scored yet another Copa Del Rey final goal in Barca’s game vs Valencia.

Having been two goals down going into half time, Messi halved the deficit late in the second half, tapping home after the ball luckily fell to him from a corner.

The goal now means that Messi has scored in six different Copa Del Rey finals, becoming the first player ever to do so.

Will Barca find an equaliser soon? Only time will tell…