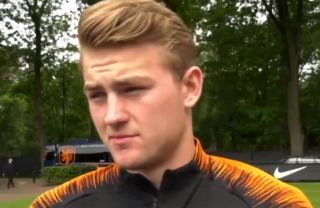 Ajax defender Matthijs de Ligt has spoken about his future in this video clip below from ESPN.

The 19-year-old has been strongly linked with Manchester United by the Daily Mirror and others, with the Red Devils known to be badly in need of a new top signing at centre-back this summer.

Matthijs de Ligt claims he has not made a decision. pic.twitter.com/i8Oa6M0deB

Speaking in the clip above, De Ligt hints he could make a decision on his future soon, suggesting he’d like to focus on his next two games with the Dutch national team first.

De Ligt mentions the Premier League as a possible destination, though he seems open over his future as he also talks up La Liga as a destination he’d be keen on.