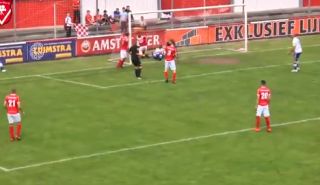 A referee scored a goal and bizarrely allowed it to stand in an incredible incident in this Dutch lower league game.

Watch below as ref Maurice Paarhuis deflects in a cross from close range, which is deemed to have crossed the line despite a defender doing his best to clear it.

Remarkably, the ref gave the goal, much to the anger of Harkemase players.

While the match official has to be admired for doing his best to chase the action and keep as close an eye on things as possible, he arguably didn’t need to be right in the thick of the action in the penalty area.

Maybe he’s just a frustrated striker? If so, he showed his penalty box poaching instincts here!