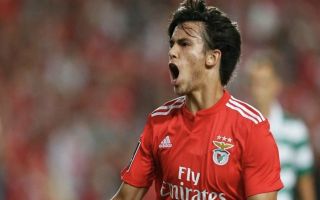 Joao Felix has given an update of sorts on his future amid all the Manchester United transfer rumours following him around this summer.

The 19-year-old is one of Europe’s most exciting young talents after a superb season with Benfica, which has unsurprisingly led to speculation that he could be on the move in the near future.

The Daily Express have been among the recent sources stating Felix is a transfer target for Man Utd in a big-money move.

And there’s no doubt the Portugal Under-21 international would be warmly welcomed at Old Trafford due to the need to strengthen the team’s attack this summer.

Based on evidence this season, Felix would be a major upgrade on the likes of Alexis Sanchez, Anthony Martial and Jesse Lingard.

Still, it seems the player himself is happy where he is and is sending the message that he’s not necessarily pushing for a move to MUFC or anywhere else.

‘I think that time will tell,’ he told the club’s official website, as translated by the Metro.

‘I’m good here, I’m very happy, I love the club, I adore these fans who adore me.

‘I want to enjoy the moment, play football, have fun doing what I like, and then, over time, things happen naturally.

‘I am very happy in Benfica.’