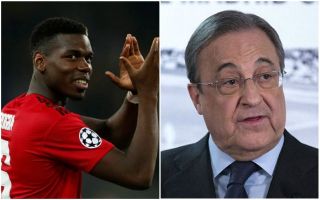 According to Diario Gol, Madrid president Florentino Perez thinks he can likely get both players in for around that price, in what would be a major blow for Man Utd this summer.

Losing Pogba to Real would be a big disappointment for the Red Devils after the time and money they’ve invested in him, even if his performances haven’t always made that investment look entirely worthwhile.

Still, the club will be well aware of the France international’s immense potential, which could be particularly fulfilled in a team like Real Madrid’s.

The Daily Mirror have also linked MUFC with De Ligt, and he’d be a crucial addition to Ole Gunnar Solskjaer’s defence.

If he ended up at the Bernabeu instead, that could really limit United’s options in terms of strengthening at centre-back this summer.