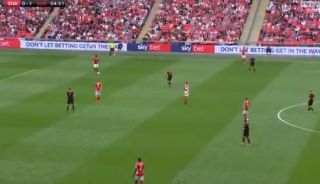 Today’s League One playoff final has got off to an incredible start with this bizarre own goal by Charlton defender Naby Sarr.

Watch the clip below as the defender just passes the ball back into his own net, with his goalkeeper probably the player more at fault, even though Sarr’s name will be the one on the score-sheet for Sunderland.

Don’t really have words for this one to be honest. Nightmare stuff. pic.twitter.com/2A2SPzPiO7

These two are fighting it out for a place in the Championship next season, but were once also regulars in the Premier League.

Fittingly, this fixture has something of a history with own goals as Sunderland’s defence put on a comical display against the Addicks back in the 2002/03 season, scoring three own goals in the space of seven minutes.

You can relive that below, but for today it’s Charlton who are miserable after a defensive calamity…