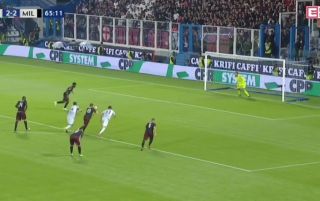 AC Milan midfielder Franck Kessie managed to keep his cool from the spot this evening, as the Ivorian international put his side 3-2 up against SPAL.

Having been 2-0 up in the first half, Milan were pegged back by SPAL in both the first and the second half as the home side levelled the scoreline at 2-2.

However, Gennaro Gattuso’s side then found themselves ahead midway through the 2nd half, as Kessie fired home from 12 yards after Piatek was fouled in the box.

Milan need to win today to stand any chance of qualifying for next year’s Champions League, thus this goal will come as a big boost for the Italian giants.