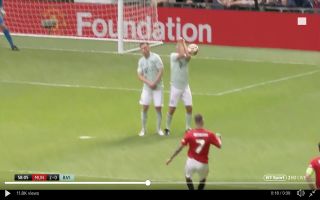 Former Bayern Munich star Marcel Witeczek was by no means prepared to put his face on the line to block a trademark free-kick from United legend David Beckham.

Former Bayern Munich attacking midfielder Marcel Witeczek used his hands to protect his face and stop a trademark David Beckham free-kick from hitting the back of the net during Bayern’s legends clash against United at Old Trafford this afternoon.

The charity game commemorates United’s late heroics against the German giants in the 1999 Champions League final, which saw the Red Devils win the treble.

Check out the bizarre moment below:

This one probably should've been given ?

We can’t blame Witeczek for doing what he did, the being struck in the face by a ferocious Beckham free-kick would certainly leave a mark.