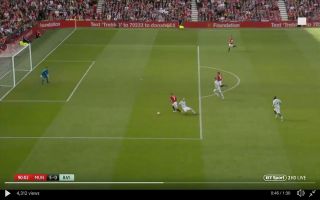 In the final stages of the charity match between United’s and Bayern’s legends, Becks turned on the style by dazzling former Bayern ace Hans Pflügler, the winger’s tidy skill dropped the 59-year-old.

Beckham charged towards goals and gave the keeper the eyes before firing the ball into the back of the net. United’s legends won the clash 5-0.

Becks has still got it at 44 years old.

Check out Beckham’s classy goal below:

He puts someone on THE FLOOR before hammering home at the Stretford End.

Football fans were in complete awe this afternoon, there aren’t many sights in world football that are better than seeing Beckham sport United’s home kit.