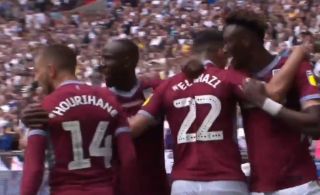 Aston Villa have gone 1-0 up against Derby County just before half time thanks to a quality diving header from Anwar El Ghazi.

It’s been a close contest so far between these two sides, who will be eager to get out of the Championship and back to the Premier League.

Villa were relegated a few years ago but have long been a top flight side so will feel they’re now closing in on a return to where they belong.

This well-worked goal makes them worth their slender lead so far, but don’t rule out Derby in the second half after their thrilling comeback against Leeds in the playoff semi-finals.