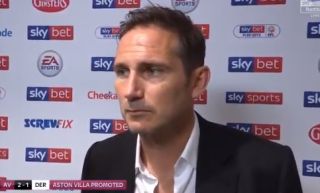 Derby County manager Frank Lampard has responded to rumours linking him with the Chelsea job this summer.

Italian outlet Sport Mediaset recently made the surprise claim that the former Blues midfielder was all set to replace the struggling Maurizio Sarri at Stamford Bridge, with the former Napoli boss to return to Italy.

Frank Lampard commenting on a possible future as Chelsea manager after full-time. pic.twitter.com/FWZJqKYnF7

However, as Lampard says in the video above, he seems perfectly happy to continue with Derby after just his first season in management.

The former England international helped the Rams reach the Championship playoff final, and he was unlucky not to gain Premier League promotion after a narrow 2-1 defeat to Aston Villa at Wembley on Monday.