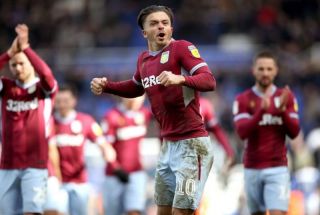 After suffering the heartbreak of losing at Wembley last season, Jack Grealish is confident Aston Villa can put it right this time round.

Dean Smith’s side face Derby County in the Championship playoff final on Monday afternoon, hoping to finally end their wait for a return to the Premier League.

Although they’ve beaten Frank Lampard’s men in both league meetings this season, it won’t be easy after they saw off Leeds United in the semi-finals, and it promises to be a thrilling encounter between two sides who like to attack.

However, having been through the experience of being on the losing end of a big game at Wembley, Grealish believes that Villa must play to the best of their ability, and he is convinced that should be enough for them to get the desired result.

“It was the worst feeling ever at the end. I was absolutely shattered and I didn’t have much left in my legs. It’s never nice to lose a final, but especially as big a final as that,” he told Sky Sports.

“I’ve got the experience and remember the pain from last year, but it’s still about who turns up on the day. I think we can beat anyone if we play to the best of our ability and I have huge confidence when I look at the players around me.

“I’m a lifelong Villa fan and walking out there on that day, as captain, will mean the world to me and my family. Hopefully I’ll get to walk up those steps as a winner at the end.”

Time will tell if Villa can secure victory this time round, but with their 23-year-old captain showing great maturity and quality this season, they’ll hope that he can play an influential role in helping them return to the top flight and putting the pain of last year firmly behind them.