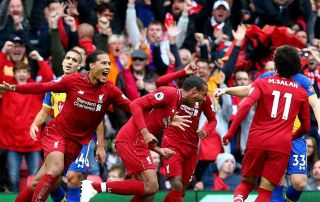 Liverpool are reportedly planning to hold talks with in-form defender Joel Matip over a new contract amid fears top clubs could begin to circle for a transfer.

According to Football Insider, the Reds are eager to tie Matip down after some of his finest form for the club this season, in which he’s surprisingly established himself as the first choice partner for Virgil van Dijk.

This is pretty impressive considering he arguably started the season as fourth choice centre-back behind Van Dijk, Joe Gomez and Dejan Lovren.

The 27-year-old’s current deal is due to expire at the end of next season and there’s no doubt LFC could do with keeping him around for the long run.

Matip was a solid performer at previous club Schalke, and he’s now seemingly fully adjusted to Premier League football after taking some time to settle.

Football Insider describe Liverpool as being ‘concerned’ about the prospect of clubs coming in for Matip, and that would certainly not be too surprising if they didn’t manage to get a new contract sorted for him soon.

Photo: Positive injury update for Liverpool as star ruled out for the season spotted in training Apr 28 2021, 16:34
Liverpool FC

Bargain watch as Liverpool are only paying a guaranteed £1.5m fee for both Ozan Kabak and Ben Davies as Reds recruit much-needed centre-backs Feb 2 2021, 13:12
Liverpool FC