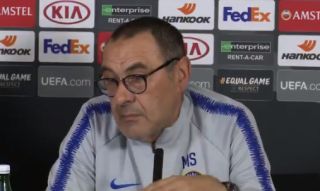 Maurizio Sarri’s agent will reportedly meet with Chelsea after the Europa League final this week, with speculation continuing to link him with Juventus.

The Italian tactician has only been in charge of the Blues for a season after arriving from Napoli last summer, and has led them to two cup finals as well as a top-four finish in the Premier League.

SEE MORE: How Chelsea look set to line up vs Arsenal without four key players, including N’Golo Kante

However, he has also faced plenty of scrutiny and criticism along the way as he’s tried to implement his preferred style of play, favouring a more expansive and attacking brand of football over the more pragmatic approach Chelsea have had under the likes of Antonio Conte and Jose Mourinho.

As per respected Italian journalist Gianluca Di Marzio though, it’s suggested that his agent will meet with Chelsea officials this week to discuss his departure, with Frank Lampard specifically mentioned as his likely successor.

Naturally, this matter isn’t going to be a priority for those concerned with Sarri in Baku this week while Lampard leads Derby County out in the Championship playoff final against Aston Villa on Monday afternoon.

In turn, no further developments are expected until later in the week, but it’s noted that Sarri remains the top choice for Juventus, with the likes of Simone Inzaghi, Mauricio Pochettino and Jurgen Klopp all possible alternatives in the event that a deal can’t be reached for the Italian.

As per the Daily Mail, Sarri has made no secret of his desire to stay at Chelsea though, and so it remains to be seen whether or not lifting a trophy later this week is enough to persuade the hierarchy to think twice and keep him on for another year at least.