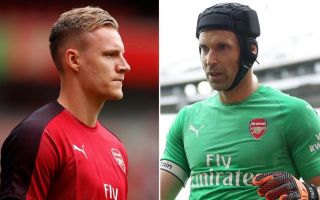 Arsenal manager Unai Emery gave a teasing response to questions over whether he’ll choose Petr Cech or Bernd Leno as his goalkeeper to take on Chelsea in tomorrow night’s Europa League final.

The Gunners boss has mainly switched to using Cech in this competition this season, with Leno his number one in the Premier League.

It’s quite common for managers to have a cup goalkeeper, but when it comes to a big final like this when Champions League qualification is on the line, many Arsenal fans will just want their coach to go with his strongest team.

Most would probably feel that is Leno, with Cech set to retire at the end of this season after looking well past his peak at this level for some time now.

Still, he’s a big name at the club and an experienced winner at the highest level, so could be the kind of leader you want on the pitch for a major European final.

Arsenal fans will have to wait and see, with Emery giving no clue over his decision in his press conference today, as quoted by football.london.

‘Cech is a great man, a great professional. I want to do something important with him. I respect him a lot. He is amazing, first as a person and a professional goalkeeper.

‘He can start or cannot start, I am going to decide.

‘How can we not believe in him?’