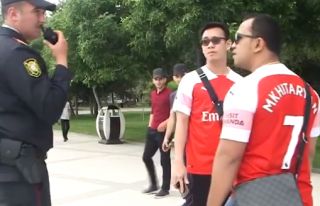 As if Henrikh Mkhitaryan feeling unsafe to travel for Arsenal’s Europa League final against Chelsea wasn’t bad enough, it seems even fans with his name on their shirts are being intimidated by police.

The video below seems to show two supporters with Mkhitaryan 7 shirts walking around Baku and being stopped by police for a quick chat.

Mkhitaryan fans are feeling the long arm of the law in Baku ahead of the Europa League final…. ?.#Mkhitaryan #Arsenal #EuropaLeague #Baku #Chelsea #aubameyang pic.twitter.com/a1CIuXOo9L

They are then allowed to carry on, but it’s not at all clear why the police felt the need to approach them in the first place in what clearly seems an intimidation tactic.

If that is what’s going on it seems like truly unacceptable behaviour and shows once again that Baku was an unsuitable choice to host this final.

This is absolutely astonishing. Azerbaijani police stopping Arsenal fans with 'Mkhitaryan' imprinted on their shirts. Every aspect of this final shames UEFA to its very core. https://t.co/W2lyNwOsuV

Can’t have him on their shirts but UEFA can guarantee Mkhitaryan’s safety. Sure. https://t.co/gqItVboR2Q