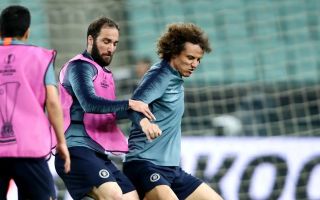 Chelsea have been rocked on the eve of the Europa League final against Arsenal as David Luiz and Gonzalo Higuain have been spotted having a row in training.

The pair came to blows after a challenge from Higuain, and it’s fair to say most Blues supporters have firmly taken a side as they line up to have a go at Higuain.

The Argentina international has been a big disappointment since joining Chelsea on loan from Juventus in January, and has therefore perhaps not done enough to earn any sympathy from the club’s fans.

Judging from the video, it seems like Higuain might have gone in a bit strong on Luiz in a challenge during training on the pitch in Baku.

And while there could be an argument that Luiz overreacts to the situation, most CFC fans are now venting their anger at Higuain.

It remains to be seen if the former Napoli striker will even start tomorrow night’s game against Arsenal as Olivier Giroud has performed well in this competition all season and could be the superior option anyway due to his fine link-up with Eden Hazard.

Higuaín has had an underwhelming spell at Chelsea on the pitch, and has now more than once been pictured getting angry w/ teammates during training.

In no way shape or form should he be on Chelsea next season. Tammy Abraham’s left leg deserves a spot before him.

Higuain can’t do one fast enough. Few times now, comes across like right spoilt kid. Leave it on one of your senior centre halves in training, expect him to have a go back. And Sarri reacting like a fanny and walking off ?. Get these weirdos out the club, fuck off to Turin. https://t.co/oAIl3wMvQa

Higuain has previously been filmed throwing hissy fits in training. Now he’s getting in Luiz’s face on the eve of a final. Where on earth has he got this level of entitlement from? Go back to Juve. #CFC

Can we send Higuain back to Turin tonight !
Absolute disgrace if he has injured Luiz!
Higuain should not even be on the bench tomorrow! #CFC #EUL https://t.co/2jXNo8TTRR

Just a reminder that Maurizio #Sarri was the one who forced #Chelsea to sign Shituain on loan.pic.twitter.com/NyygFC8m4y#CFC #UEL #UELFinal #Higuain

Sooner Sarri fucks off with Higuain the better.

What's fatboy Higuain's problem at the moment, that's twice he has kicked off in training in the last week throwing his toys out the pram, what's up ain't baku got a McDonalds you childish prick

higuain needs to get out of my club https://t.co/dEWft7psZI

Higuain needs to leave. Always moaning about something https://t.co/qwwykGBPld