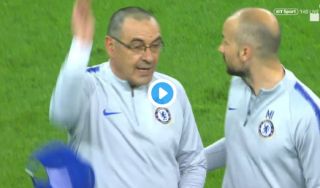 Chelsea have released a statement explaining the real reason their manager Maurizio Sarri was seen storming out of a training session on the pitch ahead of tomorrow night’s Europa League final against Arsenal.

The Italian tactician has not had the happiest season at Stamford Bridge, with speculation over his future failing to die down despite him guiding the Blues to two cup finals in his first campaign in charge.

Sarri’s tantrum also seemed to follow a spat that broke out between David Luiz and Gonzalo Higuain, though Chelsea have not commented on that as of yet.

It seems the incidents may have been unrelated, with CFC insisting their head coach was unhappy due to being unable to complete set piece practice.

An explanation. A Chelsea spokesman said: ‘Maurizio’s frustration displayed at the end of training was not related to any of his players, but was due to not being able to practise set-plays in the final 15 minutes of the hour-long training session as it remained open to media.’ https://t.co/COok8Q6SqV

This was an open training session, meaning media present would have been able to gauge something about Chelsea’s set play plans for the final had they gone through them there and then.

Still, this seems a somewhat overly emotional reaction from Sarri and perhaps shows some sign of nerves ahead of tomorrow’s big game.