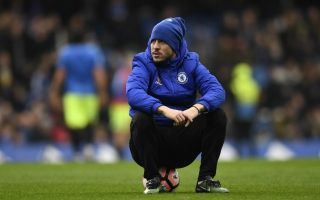 Chelsea and Real Madrid have reportedly agreed a fee for the transfer of Eden Hazard this summer in a huge blow to the west London club.

Speculation has been mounting for some time now that the Belgium international would be leaving Stamford Bridge, with the player allowing his contract with Chelsea to run down to its final year.

According to the Sun, things are now moving along as the two clubs agree on an initial fee of £100million, plus a potential £15m in add-ons, with the Blues’ Europa League final clash with Arsenal to be Hazard’s last game for the club.

It remains to be seen how this will impact the 28-year-old’s performance, but one imagines he’ll be even more motivated to go out on a high.

He even hinted as much as he recently said that a win in Baku would be the best way for him to bow out at Chelsea.

“I just want to win the trophy, that is it. It does not matter if I score or I do not score. If it is my last game, I hope to bring the trophy,” Hazard is quoted by the Evening Standard.

“Would it be the perfect farewell? Yes.”

Meanwhile, the Sun also quote Los Blancos president Florentino Perez as sounding confident about the prospect of a transfer.

“We have been trying to make Hazard a Real Madrid player for several years,” he said.

“We are working on a project to make people dream again, where we recover our hunger and ambition. I have already lived through this stage before.

“I have a dream that Hazard will arrive this year. Let’s make a good team this year.

“I am very interested in him coming to Real Madrid and I am very hopeful that he will come this year. He’s one of the great footballers.

“Last year we wanted him, but this year he only has one year left on his contract and it is easier.”

Hazard makes sense as a top target for Real to help them replace Cristiano Ronaldo, while the Sun note that CFC already have their Hazard replacement as Christian Pulisic was signed with his departure in mind.