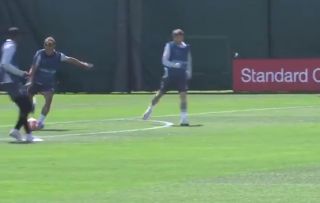 Liverpool star Alex Oxlade-Chamberlain certainly looks in good shape ahead of the Champions League final with Tottenham this weekend.

Watch below as the Reds ace unleashes a rocket of a shot into the corner in training, showing he hasn’t lost his shooting ability during his nightmare spell out injured.

Looks like Alex Oxlade-Chamberlain still has a rocket in his right boot..?

A sight we can't wait to see back on the football field! pic.twitter.com/N1y3eOo3bC

Oxlade-Chamberlain has been missed by Liverpool this season even if the team have performed superbly, with the England international offering them something their other midfielders don’t quite have.

It remains to be seen if that will be enough to get the former Arsenal man a place in Jurgen Klopp’s side in Madrid, but this strike above shows he’s ready to do some damage if given the opportunity.