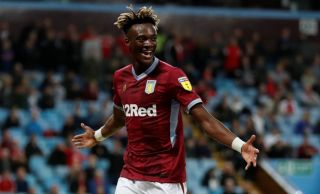 Tammy Abraham has enjoyed a productive season with Aston Villa, but his loan spell will come to an end next month and Chelsea will have a decision to make.

The 21-year-old was a pivotal figure for Dean Smith’s side this past season, scoring 26 goals in 42 appearances to fire them into the Championship playoff final.

Although he wasn’t able to get on the scoresheet at Wembley on Monday, Villa did secure a 2-1 win over Derby County to secure a place in the Premier League again next season, and the planning will undoubtedly begin very soon on how to stay there.

Key individuals such as Abraham, Tyrone Mings and Axel Tuanzebe are all on loan at Villa Park currently, and so perhaps Smith will push to sign them on permanent deals as a priority.

However, the Chelsea youngster has suggested that if the Blues want him next season then he will give his all for the club, although it remains to be seen if that’s the case as he also left the door open to an extended stay at Villa too.

“Every player wants to start. Obviously if it is at Chelsea, a team like Chelsea is always difficult because they have got world-class players. It is always going to be difficult to bring in youngsters and bring in people like myself – it is a big role,” he is quoted as saying by The Guardian.

“But for me, it is about believing in myself and to just keep doing what I do. I am still young and I am still improving. The aim is to be at the highest level and playing the best football, and if Chelsea say they need me there I will put my 100% in. I am person who believes in myself. So wherever I am at I believe that I will get in and play and score goals.”

Asked if he could return to Villa next season, he replied: “You can never say never.”

Given Chelsea have a transfer ban to consider, they may well need to take Abraham back this summer to offer quality and depth alongside Olivier Giroud up front as they seem to be short in that department as things stand.

In turn, Maurizio Sarri may have no option but to call Abraham back, and that will surely be a blow for Villa who will have to splash out and identify another striker capable of having a similar impact on a consistent basis next season.