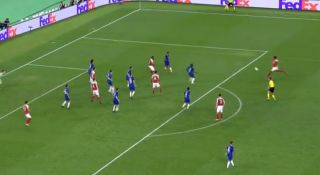 Alex Iwobi has scored a sublime effort to pull one back for Arsenal against Chelsea in tonight’s Europa League final.

The Gunners found themselves 3-0 down after a fast start to the second half by the Blues, before this Iwobi effort briefly made it look like a potentially interesting game again.

Eden Hazard scored to make it 4-1 not long after this, but Iwobi’s strike might be the best we’ve seen this evening – not that that’s much consolation to Arsenal.

All in all, the Nigerian effort has scored a beauty that’s unlikely to be remembered by many.