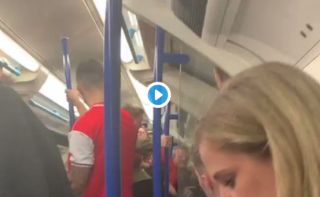 Pray for Arsenal fans tonight, everyone, they’re not in a good way at all.

The Gunners have just been thrashed 4-1 by London rivals Chelsea in the Europa League final – officially ending their hope of qualifying for the Champions League next season.

As you can see above, this has not gone down well, with some dismayed Gooners even turning to fighting each other on the tube.

This scuffle really goes on and on and looks pretty bad at points, which serves as a nice little teaser for what AFTV will be like later on!