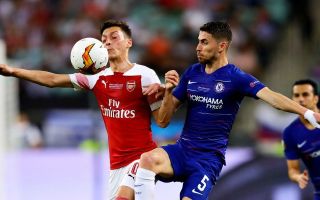 Most Arsenal fans are pretty disappointed with how Mesut Ozil has played so far in tonight’s Europa League final against Chelsea.

The German playmaker has long been a divisive figure at the Emirates Stadium after a mixed career in the Premier League.

While Ozil is capable of world class moments, he is also very well known for disappearing in big games and it’s been more of the latter in Baku this evening.

Gooners are frustrated with what they’re seeing from Ozil as they lay into him at half time, with the scores 0-0 after the first 45 minutes.

There haven’t been too many great chances created by either side, and Arsenal could definitely do with more from their main playmaker against a potentially vulnerable Chelsea side.

Arsenal have two great strikers in Pierre-Emerick Aubameyang and Alexandre Lacazette so just need to give them more service.

No wonder this lot want to see more from Ozil in the second half of tonight’s final – or see him taken off by Unai Emery!

Ozil probably has to come off. This system is so bad for him. Cutback, cutback rinse and repeat

Really missing the energy of Ramsey in the middle of the park. Ozil has a tough job to do but he’s not working the attacking space enough imo

What even is a Ozil most wash player I've seen

Should have started Ozil #CHEARS

I genuinely didn't even realise ozil was playing ??