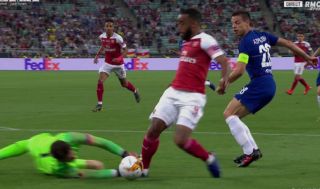 Arsenal look like they were denied a pretty clear penalty in the first half of tonight’s Europa League final against Chelsea.

Make up your own minds from the video clip below, but it seems clear Arsenal striker Alexandre Lacazette is clipped by Chelsea goalkeeper Kepa Arrizabalaga.

Arsenal will certainly feel hard done by here as VAR somehow deemed this as not being a foul, but the Gunners can also take some comfort from their superior start here in Baku.

Still, if Chelsea end up winning tonight they might look back at this moment as a crucial moment in the game.