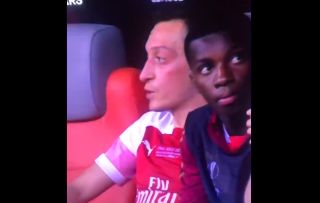 The German playmaker had a bad game in Baku, but hit out at his manager by calling him a “f**king p*ssy”, as you can see in the video clip below.

This is somewhat ironic given Ozil’s record of hiding away in the games that matter most, as he did again this evening.

Arsenal fans were furious with him at half time and must be even more so now, even if Emery also deserves his fair share of criticism for a dire performance in such a big game.