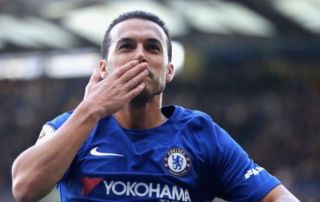 Pedro scored a key goal for Chelsea this evening, as the Spaniard helped Chelsea claim their second Europa League title since 2013.

Chelsea, who won the game 4-1, were put 2-0 up in the second half thanks to a fine finish from Pedro, who scored with his left foot following a cut back from Eden Hazard.

It was a well-taken goal from Pedro, one that gave the Blues some breathing space in the second half, as the Blues ended up romping to victory.

Pedro’s goal now means that he’s become the first player in history to score in the final of the European Cup/Champions League, UEFA Cup/Europa League and the European Super Cup.

1?? – Pedro (@_Pedro17_) becomes the first player in history to have scored in the final of the Champions League/Champions Cup, the European Supercup and the final of the UEFA Cup/Europa League. #UELfinal #CHEARS

Having played for Barcelona in the past, it’s not a surprise to hear that Pedro has scored in both a Champions League final and European Super Cup.

It’s very impressive for Pedro to become the first player ever to achieve, especially considering the fact that he’s only played in the Europa League for a small number of games.