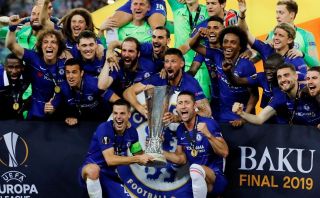 Chelsea produced a stunning second half performance to beat Arsenal 4-1 in the Europa League final, thanks to goals from Olivier Giroud, Pedro and two from Eden Hazard.

It’s the Belgian now getting all the attention after his brace and with his comments after the game very much hinting that he’s off to Real Madrid.

However, many Blues fans are praising Pedro for his big game performance, with the Spaniard continuing a fine record in matches that matter most.

The former Barcelona winger also scored in the 2011 Champions League final win over Manchester United, and he was superb against the Gunners in Baku this evening.

Pedro has never exactly been the star player of any of the sides he’s played for, but always delivers the goods nevertheless.

Something of an unsung hero, tonight Pedro is getting plenty of deserves praise by Chelsea fans as they enjoy picking up yet more silverware and another European trophy to add to the collection.

Pedro has goals in a Champions League final and a Europa League he’s the definition of a big game player and he was made and moulded in the greatest club team in modern day football that Barcelona 2011 system under Pep. He’s always there in important moments.

Knew Pedro would score tonight. Big performances in big games are in his blood. Often see Chelsea folk lump him in with Willian, but Pedro is 10x the player Willian is, even now.

Pedro has 5 goals in finals and 3 in semi finals. Big game player.

Pedro always seems to deliver big performances in the biggest of games.