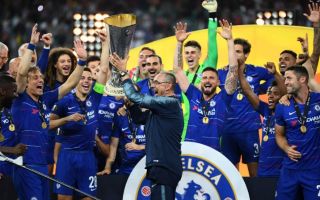 Chelsea have set a new club record tonight after beating Arsenal 4-1 in the Europa League final in Baku.

The Blues managed an entire season unbeaten in Europe, winning 13 and drawing just two of their 15 matches in the competition*.

MORE: Video: Arsenal fans fight each other on the tube after Chelsea humiliation

And while some will no doubt say this was made a lot easier by not playing in the highest level of European football – the Champions League – it’s still a fine achievement by manager Maurizio Sarri.

Chelsea have arguably been too good for this level and will now be back in the Champions League next season – something they’d already assured anyway after finishing third in the Premier League.

Sarri deserves credit, however, with the Italian tactician facing plenty of criticism in his first season at Stamford Bridge, but ending the year with a trophy, a strong league finish, a domestic cup final appearance, and now an impressive new club record in Europe.

Calciomercato have linked Sarri with the Juventus job, but perhaps CFC supporters will now hope he stays on in west London.

* Technically Chelsea drew their second leg with Eintracht Frankfurt as well but it’s counted by most stats sites as a win as they won the ensuing penalty shoot-out.