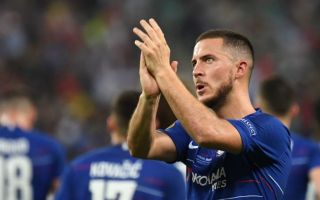 Chelsea star Eden Hazard has surely all but confirmed he’s going to be leaving the club for Real Madrid this summer with his comments after tonight’s Europa League final win over Arsenal.

The Belgium international put in a superb display to score twice against the Gunners in a 4-1 rout for the Blues, ensuring he can go out on a high with the west London giants.

Speaking to the Evening Standard before tonight’s game, Hazard said a win tonight would be the perfect paring gift, and he’s now more or less confirmed he’s going to be leaving, even if he tried to still leave it slightly open-ended.

You can see his full quote in the tweets below, but considering the amount of strong speculation that’s been going on for months now, it’s hard to imagine he’ll continue at Stamford Bridge after this.

“I think this is goodbye but in football you never know.” @hazardeden10 post-match after @ChelseaFC win #UELFinal #UEL #CFC

Eden Hazard: "I think it's a goodbye … maybe it's time for a new challenge."

Good journalism from BT Sport to push for the answer, at a difficult time. And lands the story that takes the EL win forward – Hazard is off to Madrid.

AS report that Hazard’s transfer to Real Madrid could be announced in a few days, while the Sun have also quoted Los Blancos president Florentino Perez as sounding pretty confident he will finally sign the 28-year-old.

Chelsea fans can celebrate tonight’s win, but this looks like being a real downer for them this summer as replacing Hazard will be close to impossible, especially if they’re hit with a transfer ban.