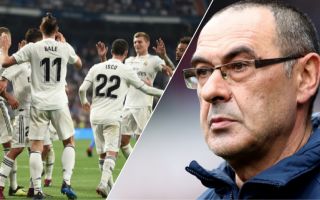 Maurizio Sarri wants Real Madrid and Spain superstar Isco to join him at Juventus should the Chelsea manager end up swapping west London for Turin this summer.

Sarri has had a decent first year in charge of the Blues, guiding the club to a third-placed finish in the Premier League, as well as reaching two cup finals in the form of the League Cup and the Europa League.

However despite this, it seems like the Italian could be on his way out of the exit door at Stamford Bridge this summer, as Don Balon are noting that Juventus are keen to bring him in as their new manager.

The report states that Sarri and Juve are in constant discussions, and that the Italian has already stated that he wants Isco to join him at the Old Lady should he end up getting the job.

Juve suffered a somewhat disappointing season this year, with the club only winning one out of a possible three major trophies in the form of the Serie A title.

The club failed to achieve success in both the Coppa Italia and the Champions League, something that may have played a part in Massimiliano Allegri deciding to step down as manager at the end of the season.

Don Balon’s report also states that Isco is keen to leave Los Blancos, thus if Juve were to go in for him with Sarri in charge, the task seems far from impossible.

Will Juve end up bringing in both Isco and Sarri this summer? We’ll just have to wait and see…